Sorry for the lack of post lately, but sometimes life gets in the way.

Since today is Easter I have been thinking a lot about the Gifts Christ was given by the Maji after his birth. We all know why Gold was a gift of value fit for The King of Kings, but I think a lot of us do not understand why Frankincense and Myrrh were gifts fit for The King. I am sure the Maji gave The Baby Jesus Frankincense and Myrrh resins and not oils, but the resins also have a lot of the same properties as the oils.

Both frankincense and myrrh have been used in meditation and prayer for centuries,

they both help ground a person and assist in breathing. They were used to cleans the Old Jewish Temple.  “We have textual—and also archaeological—evidence that both frankincense and myrrh were used as medicinal substances in antiquity,” confirmed Alain Touwaide, a historian of medicine at the Institute for the Preservation of Medical Traditions and the Smithsonian Institution.

There are 42 known species Frankincense, while we are not positive which one was given to The Christ Child we do know they all have similar properties and uses. I am sure in antiquity they were a lot more concerned with fragrance than they were of chemical components they had no way to identify 2000 years ago.

Frankincense has been used for years to assist with healing or easing all kinds of cancers, teeth and gum issues, scars, respiratory issues, skin healing, analgesic, anti-inflammatory, and an antioxidant. 2000 years ago the only way to transport this resin was by camel along the trade routes of antiquity. This made it a rare and precious commodity, the average person rarely ever had in their possession, yet it was given to a carpenter’s son.

Myrrh was just as rare in the world Jesus was born into and like frankincense, I am sure it was the fragrance it was most prized for not the chemical components. Myrrh has also been used for years to assist with healing or easing all kinds of cancers, teeth and gum issues, scars, respiratory issues, skin healing, analgesic, anti-inflammatory, and an antioxidant. They were both used for healing and helping all kinds of issues in the old world. 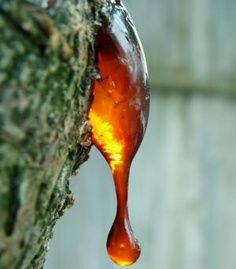 Frankincense was also associated the “Spiritual” and as we know none was more spiritual than Jesus. Myrrh was associated with the “Afterlife” and no one has more knowledge of the afterlife than Jesus.

I have always been intrigued by the way both frankincense and myrrh are bleed from the tree, just as Jesus was nailed to a tree and bleed to treat and heal the world. As I look at this drop of myrrh dripping from the tree I am reminded of the blood shed for you and me.

Of the 3 Gifts to Jesus, Gold may have been the least valuable.

Send this to a Friend:
Previous: Previous Post
Next: New Lavender Research